October 23, 2018, marks the 62th anniversary of the 1956 Hungarian Revolution. Ms. Szilagyi published the book called The Eleventh Arrow to commemorate the many lives lost in the battle for freedom. This book was written to preserve history and to honor those men, women and children who fought for the right to live in a free country.

The Eleventh Arrow is available in paperback, Kindle or a FREE Trial Audio version available with this link  Free with 30-day Trial

Enjoy listening to this action packed FREE trial audiobook while looking at the pictures of the Hungarian Revolution.

The Eleventh Arrow is a story that was told to the author by her mother her entire life. Author Eva Szilagyi was only sixteen months old, her brother was two, and her older brother turned four during the Hungarian revolution. He father did not plan on becoming a freedom fighter, but as the fighting escalated in Budapest, he and his friends become the Eleventh Arrow of the Hungarian revolution. They all took a blood oath to protect each other during the battle, as others have in the Hungarian history, starting with the first leader of Hungary, Arpad and his ten tribes-people, who in history were called The Ten Arrows.

This book is based upon a true story of a courageous freedom fighters, his wife and their three small children escaping Russian communism during the 1956 Hungarian revolution.

The Eleventh Arrow book not only captures the essence of the time period, but also gives readers a glimpse into the life of a loving family that must strive to survive amid a tyrannical regime.

To learn more about “The Eleventh Arrow,” visit https://theeleventharrow.wordpress.com.

For those people who like to read about history, let this book be your next read!

A peaceful march asking for the communists to leave Hungary. 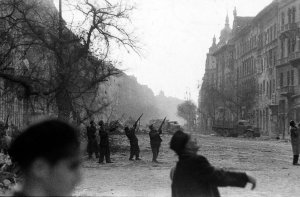 Time for celebrations. Soviets tell the Hungarian people they will leave.

Hungarians cut out the soviet emblem out of their national flag. 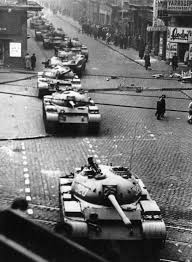 Soviets lie and kill over 2,500 men, women, and children Hungarians, as they re-enter with more force.

200,000 men women and children flee the country and become refugees.