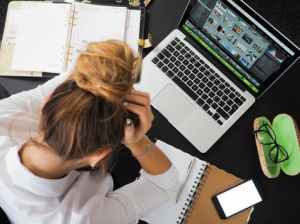 You as a reader probably never give it a thought how an author finds a name to put for their charters. I know before I started writing books I never gave it a thought, that’s for sure. Isn’t it just supposed to pop into the heads of the author or maybe when they write, they design the character after someone they know, and the character gets that name, right?

Not in the case of the book I wrote called Modified 2099. I had no idea when I started writing this book what names I would use for who. My first character whose present-day name is Anna, first started out as Mary. As the book progressed so did the names that were added to the story. The second person’s name became Harry. (Harry’s name was sort of a joke). So, I had to keep that name no matter what, but the name I couldn’t keep was the name of Mary. Harry and Marry through the whole book would have been comical. So, the name Mary was a quick edit to Anna. Do I happen to know an Anna in real life I could relate to this story? No… But I always liked the name and therefore Anna was my main character’s name.

Some names were hard to come by for me when I was writing the book. I drew a blank choosing names I needed so desperately. So, I did the next best thing. I went to Facebook and asked my friends if they wanted to be in my book. I was so surprised that one person actually told me. Yes, he wanted to be in my book and I could use his name, but I would have to pay him royalties. Hahaha. You can imagine that guy was 86 ed out of being in my book. I was lucky I had other friends who asked me to use their names in my book. Make them the star of my book. One of my friends asked me to use his name if there was a gruesome death. Make sure to take him out as painfully as possible. OK, so I didn’t take him out that gruesomely and I didn’t use his full name, but I did have fun with him as a character.

I also used family names when loved ones were to be named. I wanted to make sure that these people remained special in the book. Those names were easy to assign to superior future people in the book. But… I want to tell you a secret… When finding the names for the GMO “Genetically Modified” people, (since it is a sci-fi, futuristic, time travel book), they had to be something uncommon because each name had a meaning. The names I chose for them was that of a fish. That’s right fish names, and it really suites them. Each fish name was meticulously chosen for a character in the book. Why you may ask, would an author choose a fish name? Well, you will just have to read the book to find that answer out. Hurry and order your book today on Amazon. I would love to hear your comments.